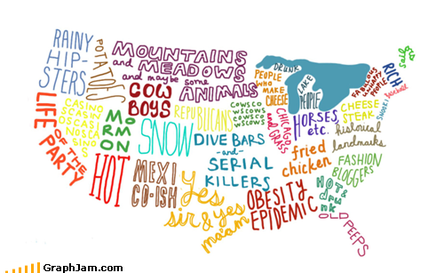 We have to begin our study of American history somewhere, right?  There is always a reason why people settle where they settle and a lot of the reasons have to do with geography.  Since geography is so important to everything we're going to study, how about starting with a map quiz?  In fact, how about having a map quiz every week?  Excellent!  I agree!  I'm glad you like the idea!  Let's do it!!! 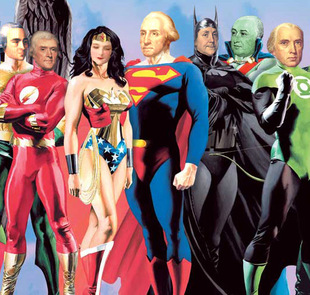 Imagine... You and your friends gain control over a new area of land and decide to create a country... The first thing you have to do is figure out who's going to run it, right?  You need a government - but what kind of government should you create?  Monarchy?  Democracy?  Republic? Would you make everyone equal or are there certain people who should have more rights than others?  Or would you just you take total control yourself and try to run things to your advantage?  Those are pretty hard decisions, huh?  Well, those are the decisions that faced the guys in the picture to the left when they led the colonies in winning their freedom from England (ok, I think they might have worn slightly different clothing)... Another important question to answer for a new country is... what kind of laws would you make?  Should only certain people have certain rights or should everyone have them?  These are the tough decisions that had to be made and agreed on, by people who lived very different types of lives.  Would you believe that the first time they tried, they made a bunch of laws that didn't work?  The Founding Fathers, who were supposed to be the smartest guys around, messed up the laws so badly that they had to meet again and redo everything! Nobody's perfect!

Nowadays, we look at a map of the United States and it seems to make sense that it extends from the Atlantic Ocean to the Pacific Ocean.  Was that meant to be?  Should we have stopped halfway across and limited the size of our country?  Who did we, as a country, abuse and hold down in order to do this? Was it fair to do that? 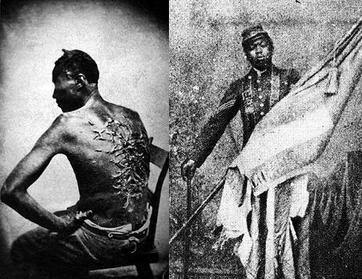 Nothing has torn our country apart, from Colonial Times until the present day, as the conflict over race.  It started when the first slave stepped foot off of the first slave ship and still continues today.  To say that slavery was horrendous doesn't even begin to describe it.  There are no words for the horror.  The Civil War, started for many reasons, essentially became a war over slavery.  More Americans died in the Civil War than in all other U.S. wars COMBINED!  As if the war wasn't awful enough, the attempt to put the country back together afterwards (reconstruct the country) was, in many cases, a complete disaster.  Issues over race most definitely did not go away with the end of the Civil War.  Discrimination continued, just in new and awful ways... 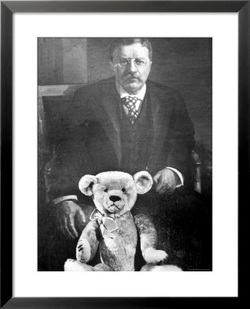 You studied industrialization last year in global, right?  Well, it's baaaaaaack!  Industrialization and the conflicts that it caused tore apart our country in new ways.  People clashed over the rights of workers -- some people didn't think they should have any!  Progressive leaders tried to change the entire path of our country and were fought by those in power.  Has anyone ever heard of Margaret Sanger?  Jacob Riis?  Upton Sinclair?  These are all people who bravely stood up for people who had no voice.  They alerted the entire country to issues that were facing our country and made the government and big business face them.  The conflict got very ugly... By the way, extra credit if you can tell me who the guy to the left is, why I have him as the picture for this unit, and why he has a teddy bear in front of him!

I'm sure that you remember everything from your study of World War I from last year, but this year, we take a look at it from the U.S. perspective.  Remember that the U.S. did not get involved right away -- so why did we decide to get involved at all?  At the same time as this fight was raging in Europe, a very different fight was raging in the U.S. -- women who were fighting for the right to vote ("suffrage").  The "Roaring '20s," as the 1920s are known, was a time where the country's economy was booming (for many people).  When the Roaring 20s ended, it ended in a giant crash, beginning the greatest economic depression the world has ever seen!  In Europe, it led to the rise of Hitler, but in our country, it led to a completely different set of issues.  It also led to one man being in control of our country for 13 years -- some said he was a dictator! 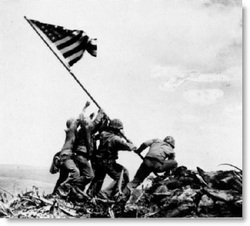 The end of WWI went SO badly that a mere 20 years later, we had another world war!  Can you believe that?  Ridiculous... During this unit, we will look at the war itself, where the Allied Powers fought against the Axis Powers, but unlike Global History, we will look at it from the perspective of the United States.  What did the United States do during the war?  What did they not do?  What was their response to the horror of war?  On one hand, we fought for a noble cause overseas, but on the other hand, we did some things to certain minority groups in our own country that were simply shameful... 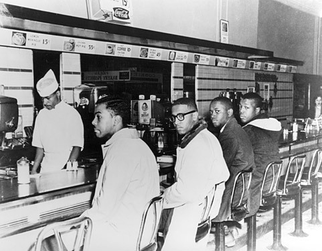 "Be the change you want to see in the world."  This is one of my favorite sayings from Gandhi.  One question Gandhi tried to answer was, "If there is injustice, how do we resist?"  What methods would you use to fight an injustice?  The methods that Gandhi used (civil disobedience/non-violent resistance) was so successful that they were copied by other people, such as the 4 young men sitting in the picture to your left.  They changed our country forever - but who are they?  Why are they sitting there?  In this unit, we will study the many many brave men and women who fought for full freedom for all minorities in the United States. Wait... Did I forget to mention that we'll be writing our research paper on this topic?  We'll talk about that later... It'll be good fun...

After the research paper, we'll discuss the events that have occurred in the past 40 years -- the years during which decisions were made decisions that changed the path of our country.  We will try to see what lessons we can learn from these decisions and what the consequences of those decisions were on our world today...

Are you all ready for the U.S. Regents?  You will be!  YOU CAN DO THIS!  ANYTHING IS POSSIBLE!  Every single one of you can pass this exam and will!  We're going to finish up strong and ROCK this test!!!